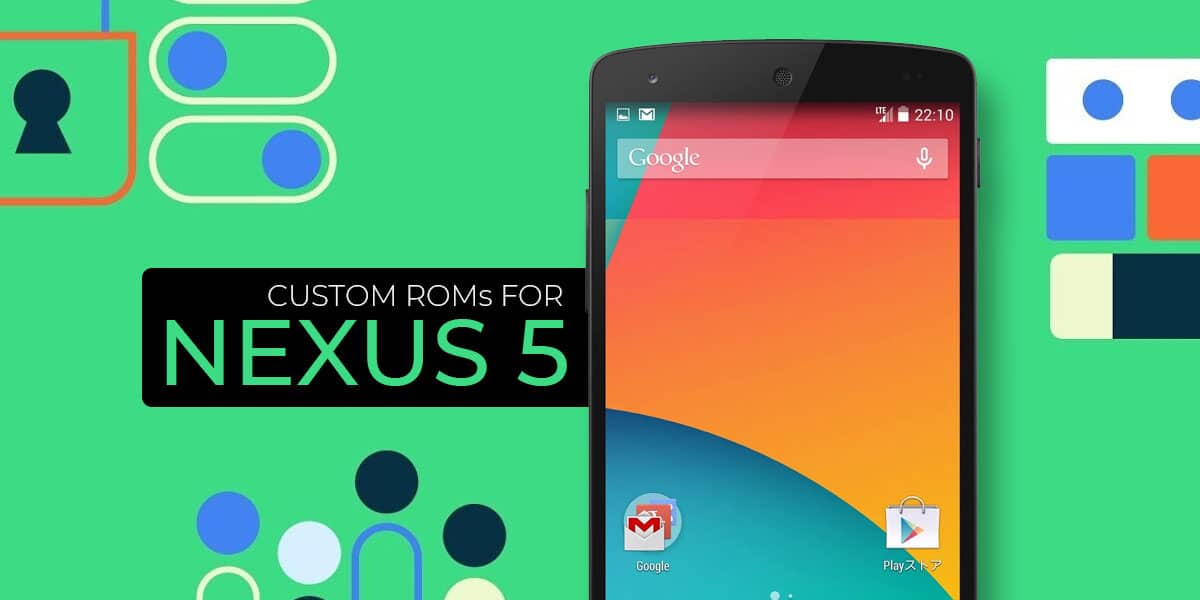 While Google’s Pixel edition phones may not be making the rounds of the market, there was a time when Google’s Nexus series was the talk of the town. Launched in October 2013, Google’s Nexus 5 gave a stern competition to Samsung’s Galaxy Edition smartphones and became Google’s flagship Android model.

Although the Nexus no longer receives OTA updates, it is still a hit amongst the users. But in this article, we will be talking about the Custom ROMs for Google Nexus 5. A Custom ROM is an excellent option for tech geeks who are constantly looking to upgrade their devices.

Since Google Nexus 5 runs on Android OS, you can install a custom ROM on your device. This article will be listing the top 5 best Android 11 Custom ROMs for Google Nexus 5.

What is Custom ROM?

Custom ROMs let you unlock your phone’s additional features, which are generally inaccessible without a custom ROM. Similarly, installing a custom ROM leads to better battery optimization and overall device performance. In simple words, a custom ROM refers to the modified version of the OS that is available for Android devices.

Open-source software like Android refers to software wherein any party can edit the existing code, recompile it, and release it for various devices. Compared with Stock ROM, custom ROMs come out on top as they offer multiple features and customization options followed by better battery consumption. Therefore, it is entirely SAFE to install an Android 11 Custom ROM on Google Nexus 5 as long as you do not brick your device.

The primary reason for installing a custom ROM for your Google Nexus 5 is that it offers better optimization and device performance than Stock ROM. Meanwhile, it also gives you tons of customization features that will significantly boost your phone’s performance. Also, custom ROMs are updated at regular intervals wherein the Android community members fix all the bugs reported.

Once you’ve matched all the prerequisites, you’re good to go. Here are the Top 5 Android 11 Custom ROMs for Google Nexus 5.

Lineage OS is a free, community-built, aftermarket distribution of the latest Android OS, including Android 11. What makes it unique is that you can use Lineage OS without installing any Google applications whatsoever.

The latest Lineage OS 18.1 version has dozens of new features for better battery optimization and device performance. Also, it is now possible for a user to run LineageOS on their local PC. Thanks to Google’s Project Treble, the Lineage OS is accessible to even more devices. The best feature of Lineage OS is that it automatically detects the apps draining your device’s battery and puts them to rest.

The crDroid custom ROM aims primarily at delivering heavy-duty performance while maintaining stability for every Android device. Designed from the ground up, the crDroid Google Nexus 5 custom ROM is simple to handle for every supported device.

crDroid uses Lineage OS as its base to provide dozens of customizable features to its users. crDroid v7.9 is based on Android 11, and its features are as follows.

Known commonly as the Ice Cold Project, the AICP has evolved into a mature ROM with some of the best community developers. AICP’s customization features offer a clean UI environment and are based on Lineage OS following some minor tweaks on the AOSP.

Google’s Pixel Experience AOSP ROM comes equipped with all Google Apps preinstalled along with a launcher, wallpapers, icons, fonts, boot animation, and so on. The Pixel Experience is a custom ROM that brings a lot of out-of-the-box features to your device.

It provides your system with a clean, smooth, and stable performance while simultaneously providing dozens of customization features. The Pixel Experience is a custom ROM that fits in between heavy skins and Pure Stock Android.

The Divest OS is a secure and reliable aftermarket system that provides a smooth overall performance. This Android 9 ROM for Google Nexus 5 comes with multiple privacy enhancements and a verified boot on supported devices.

In addition, this custom ROM allows for end-to-end encryption for a privacy-focused mobile distribution between you and your contacts. Also, the company has finally included an automated security patch that can apply fixes for over 2,500 CVEs